This month’s fellowship walk will take us to see wild daffodils in Marshwood Vale. We will meet in the car park of Pilsdon Manor at 1.45pm

The walk in February had to be cancelled due to the storm over the prior 36 hours and its outbursts on Sunday.

A lovely walk in November, when a dozen of us set off through a series of hidden lanes and paths from the A30 Chard Road to enjoy fine views from the summit of Castle Hill, site of a water tower built as a sham castle to supply water to the 27th century Avishayes House nestling in the valley below. A stylish clock tower with a chiming movement dating from the 19th century was added in 1985. This tolled for us at 2.30 and our return route took us through the attractive grounds of Avishayes House. There will be no walk in December.

Our walk in October was well planned by Mike Jones – falling on one of the first dry days of the month! It took us from the cleverly arranged Fudge factory and Dental Surgery in Stoke-sub-Hamden through a maze of little leafy paths to the very pretty village of Norton and back. Thanks Mike for an interesting walk.

This months walk took place on Sunday 22nd September walking from Hawkchurch (off the Lyme Road).A very pretty walk around Hawkchurch was led by Mike Jones. Initially treated to heavy rain, the clouds parted and gave us lovely views of the Axe Valley and warm walk back to the village – which had a working well pump! 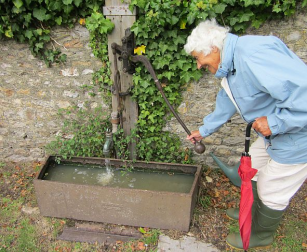 The walk in July took us around Melbury Park. It was the perfect summers day and in the surroundings that only English parkland can provide; rolling meadows, mature great trees and silence apart from our chatter!

My eagle eyed wife picked up a deer antler (RH). Now we need to find a lopsided deer (LH) and follow it for a bit. Please note there will be no walks in August.

The walk in May took us (just three unfortunately) through the lovely countryside between Barrington and Stocklinch. All the gardens were a blaze of colour – Wisteria, Iris, Roses and more. The views from the ridge between the two villages were stunning in the sunshine, one to the west and the Blackdown Hills and the other north and the levels.

The June walk is cancelled the  because of the difficulty with dates during June (6.00pm United Service, 9th; Fathers Day, 16th, then holiday’s etc.)

If you are able to visit N.T. Barrington Court on the 15th or 16th (pay entry for non-members), there is Jazz on the Lawn between 1 and 3pm with a pleasant walk in the surroundings.

We anticipate a walk through Evershot during July. 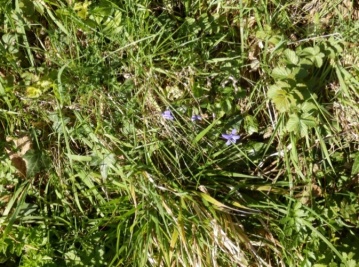 Led by Don and Diane Cameron we set out on our March walk from Pilsdon Manor, under a blue sky and beautiful sunshine, in search of wild daffodils. Our search was rewarded along with sight of May blossom, primroses, celandines, a few violets peeping through and new lambs in the fields. Our enjoyment was complete when arriving back at the Pilsdon Community on entering their small church, we were greeted with tea and biscuits, kindly provided by one of the staff, and a short talk on how the Pilsdon Community was founded and is continuing to help people in need.

Our thanks to Mike Jones for leading our February walk. 10 of us met at Blackdown Village Hall.  We split into two groups, as a few felt unable to complete the full walk.  One group walking over the fields to Pilsdon Pen and the other one walking the lane alongside the Village Hall.    It was a lovely bright day and both groups enjoyed seeing large drifts of snowdrops in their natural habitat.  Alongside the lane we saw frog spawn in a small stream and both groups were delighted to see at least 5/6 roe deer in the nearby field.  It was obvious they were aware of us walkers but they ignored us, which made our day.

Our thanks to Mike Jones who led an interesting walk around the Nine Springs beauty spot. The number of folk taking part was well in the teens (not referring to age ! ) because we were pleased to have company from U3A and a new community group in Crewkerne “The Going Out Club”.

Our next Fellowship walk will take place on Sunday 20th January at 1.45pm

Our walk will take us around Yeovil Country Park & Nine Springs,Yeovil.  Cars park in Goldenstones with cafe adjacent.. All are welcome.

Despite the rain (which fell vertically and was therefore defeated by our umbrellas), Mike led us on a pretty walk around the grounds of Cricket St. Thomas Hotel. The house has predominantly naval connections – the Chapel being a quiet meeting place for Nelson and Lady Hamilton. On taking a wrong turning, a major part of the walk was trying to navigate a labyrinth of corridors inside the hotel!